From Heraldry of the World
Your site history : British Oxygen Company
Jump to navigation Jump to search 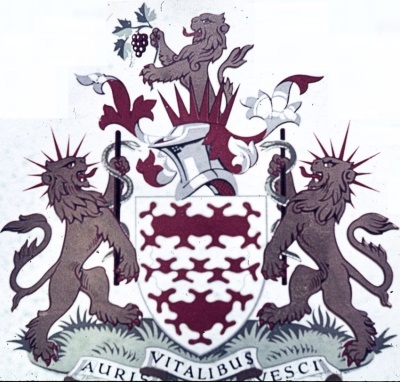 Arms: Gules, two bars nebuly and a bordure nebuly argent.
Crest: Issuant from a crown of rays gules, a demi lion Or holding in the paws a vine branch slipped, leaved and fructed, proper.
Supporters: On either side a lion Or, the head rayonee gules, holding aloft in the interior paw a staff of Aesculapis sable, the serpent vert purfied gold.
Motto: Auris vitalibus vesci

The arms were officially granted on April 5, 1961.

If you have any information on these arms Oxygen Company mail us !