From Heraldry of the World
Your site history : Bromley
Jump to navigation Jump to search 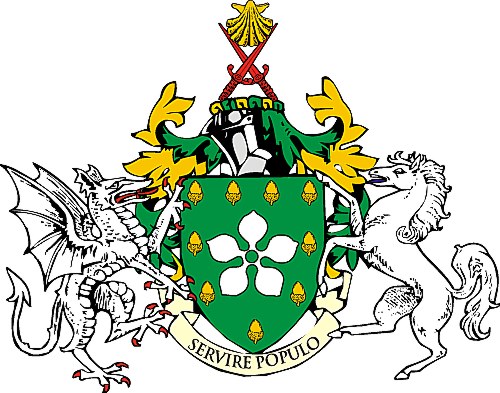 Arms: Vert a pierced Cinqefoil Argent within an orle of Acorns Or.
Crest: On a Wreath of the Colours two Swords in saltire Gules ensigned by an Escallop Or.
Supporters: On the dexter side a Dragon and on the sinister side a Horse both Argent.
Motto: 'SERVIRE POPULO' - To serve the people.

Instead of combining charges from the arms of the merged councils, a deliberately simple coat of arms was designed. The green field shows that this is a largely rural Borough. The main charge is a pierced cinquefoil. The five leaves stand for the five merged councils. The acorns are for the many semi-rural villages in the area.

The crest has crossed swords in reference to the many military establishments within Bromley's boundaries. The scallop comes from the arms of the See of Rochester, who held the manor of Bromley from the reign of King Ethelbert.

The supporters are a white dragon and a white horse. The dragon comes from the arms of the City of London and signifies that Bromley is now a Greater London Borough. The white horse is for Kent, in which county Bromley was situated until 1965. 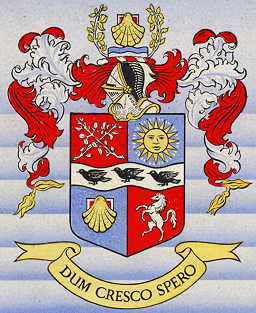 Arms: Quarterly Gules and Azure on a Fess wavy Argent three Ravens volant proper between in the first quarter two Branches of Broom in saltire Argent in the second quarter a Sun-in-splendour in the third quarter an Escallop Or and in the fourth quarter a Horse forcene Argent.
Crest: On a Wreath Argent and Gules between two Branches of Broom proper a Bar wavy couped per fess wavy Azure and Argent ensigned with an Escallop Or.
Motto: 'DUM CRESCO SPERO' - While I grow I hope.

The sprigs of broom refer to the derivation of the name; ' a field or pasture where broom grows '. The sun recalls the once important Manor of Sundridge, owned in the reign of Henry III, by the Bland family. Sundridge continued in the family for sometime, eventually passing through different hands until Sir Claude Scott purchased it in 1796, and built the present mansion.

The shell is from the arms of the See of Rochester, which held the Manor from the reign of Ethelbert, it is also the emblem of pilgrims and recalls the many roads and lanes in Kent, still called Pilgrims Road or Pilgrims Way along which they travelled. The horse is from the arms of the County Council and the wavy line and ravens refer to the River Ravensbourne. The river has its chief source in Caesar's Well at Keston, its name is supposed to be derived from the following legend: - Roman soldiers in great need of water saw a raven frequent a certain spot near their camp, upon examination a small spring was found among the bushes. Upon digging it out a copious spring was found.