From Heraldry of the World
Your site history : Bruce Hall
Jump to navigation Jump to search 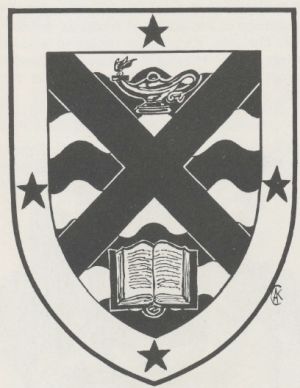 Arms : Barry wavy of eight Argent and Azure a Saltire Gules between in chief an Ancient Lamp enflamed Or and in base an open Book proper bound Gules edged Or, all within a Bordure Or charged with four Mullets Azure.
Motto: 'Felix Rerum Cognoscere Causas'.

The red saltire and the four stars allude to the arms of Lord Bruce of Melbourne, first Chancellor of the Australian National University, after whom Bruce Hall was named.

The gold bordure, lamp, and open book (and again the four stars) are taken from the (assumed) arms of the former Canberra University College, amalgamated in 1960 with the A.N.U.

The waves (and stars) repeat elements of the arms of the Australian National University, of which Bruce Hall is a part, and the motto answers that of the University, 'Naturam Primum Cognoscere Rerum'.