From Heraldry of the World
Your site history : Bryant and May
Jump to navigation Jump to search 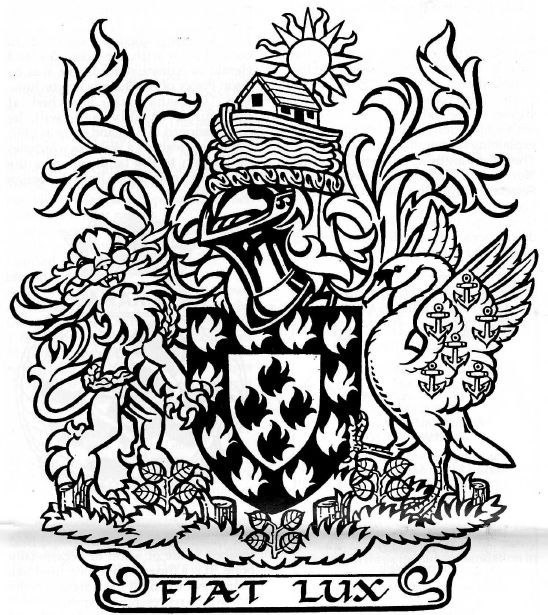 Arms: Gules semy of Flames an Inescutcheon Or thereon four Flames also Gules.
Crest: upon a Helm with a Wreath Or and Gules Upon Water barry wavy Azure and Argent an Ark Gules and rising behind the same a Sun in Splendour Gold. Mantled Gules doubled Or.
Supporters: On the dexter side a Lion guardant Or incensed proper and over the sinister shoulder a Wreath of Laver baldricwise also proper and on the sinister side a Swan its wings elevated and addorsed proper the underside thereof semy of Anchors Azure the Compartment comprising a Grassy Mount with Poplar Stumps and Saplings thereon all proper.
Motto:"Fiat Lux"

The arms were officially granted on January 4, 1988.

The shield is charged with flames, as is the inescutcheon, counterchanged, all endeavouring to give the idea of safety protection as Bryant and May produced the world's first safety match. The flames seen together with the swan supporter refer to the famous trade name for safety matches 'SWAN VESTAS'. A flame was kept alight at all times in the Temple of Vestas, the Goddess of the hearth and its fire.
The underside of the swan's wings are strewn with anchors in reference to HMS Devastation, the ship depicted on the 'England's Glory' matchboxes.

The golden lion's dexter supporter heralds Bryant & May as a British concern. It is shown incensed, that is to say with flames coming out of its mouth and ears, a further reference to flames/ light. It wears a sash of Laver, the seaweed which is held in the beaks of the Liver Birds in Liverpool's own armorial bearings.

The compartment on which the lion and swan stand is shown as a grassy mount with stumps of felled Poplar trees and new saplings, indicating that Bryant & May plant as well as harvest trees. The Crest is an Ark, also a reference to one of the firm's famous trade names, with a Sun in Splendour rising above the cabinet, echoing the scriptural motto "Fiat Lux" - "Let there be light".