From Heraldry of the World
Your site history : Café Sanka : La France Héraldique
Jump to navigation Jump to search 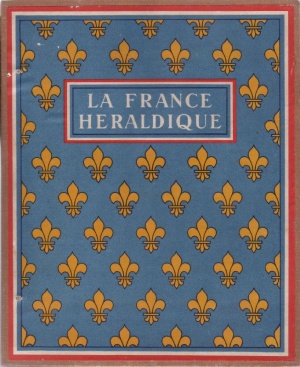 La France Héraldique is the name of the series of albums issued by the Café Sanka company. This was the French daughter of the German Kaffee Hag company. The name Sanka was derived from Sans Caféine, meaning without caffeine. In France the brand name Hag was never used, in other countries Sanka was used as a brand of lower quality coffee, with Hag being the main brand (like in Holland and Belgium). In the US first Hag was introduced and later replaced by Sanka as the main quality brand.

Around 1913 Kaffee Hag started with issuing albums with collectable stamps with the arms of towns and provinces of Germany. A few years later Swiss albums followed. Due to the First World War the series stopped. In the late 1920s Hag started again in Germany and Switzerland, but now also in other countries were the coffee was sold. The Netherlands was the third country to issue heraldic albums, followed by a number of other countries. In France the company started in 1929, see image below. In all countries the series were stopped due to the Second World War. After 1945 no new albums were issued.

The first reference (known to me) for the albums (click on image to enlarge):

The album series La France Héraldique has a complicated history.

Initially the series were intended to be issued as loose sheets, to be bound in albums per (historical) region.Therefore initially the album sheets with the arms and description of the region were issued. This was to be followed by one sheet with the nine most important cities of each province (chefs-lieux de département) within the region (each region consists of one or more provinces). Finally per province all municipal arms were to be published. However, this scheme was never completed. For each province a page with the provincial arms was issued. Later also for each département a page with the nine main towns was issued, but only of the Alsace region all arms were published.

In total there were 40 different albums planned, but only 6 were actually issued.

The first album was initially published with a brown cover, displaying five regional arms. The lay-out of the pages was similar to the Dutch and Belgian albums and were probably designed by the same studion, the Studio Van der Laars in Hilversum, Holland. The images were not designed by them, but by an unknown author. For examples, see the images below.

In the first album only some provinces were displayed, but all the regional arms were included. Albums II-IV included the arms of the other regions and their provinces. Albums V and VI show all the municipal arms of the Alsace region, the first region in the alphabet and the only region that was completed.

The result of the change from loose sheets to albums is that the regional pages are duplicated, as are the arms of the principal cities in the two provinces of the Alsace Region (Bas-Rhin and Haut-Rhin). Of the 1363 images in the albums, 62 are duplicated.

Another effect is the numbering. In the first album the stamps are numbered from 1-117 (the stamps with the regional arms were not numbered, album I contains 158 stamps), but in the text the corresponding towns were numbered 1-9 for each province. In albums II-IV the stamps were now numbererd by region, in the text the towns were still numbered by province; for example the Gascogne region has 3 provinces, so the stamps are numbered 1-27, but in each province the towns are numbered 1-9. Again the regional stamps were not numbered. In some cases the stamps were not numbererd according to the alphabetical order of the provinces by region. For example in the Guyenne region there are 6 provinces, which means numbering from 1-54. However, the province Lot has numbers 46-54, but, as the third province alphabetically, should have had 28-36. In the album the sequence thus is: 1-27, 46-54, 28-45. Albums V and VI are numbered combined for the whole Alsace region. Album V contains the Bas-Rhin province numbers 1-240, album VI contains Bas-Rhin 241-276, followed by Haut-Rhin province with 277-474.

To make matters even more complicated, in some reprints the misnumbering was corrected, which means that some towns have different numbers, as shown below.

The arms were drawn by several (unknown) artists and especially the first series and the regional arms were made by all artists and thus different versions of the stamps exist. The later stamps were only made by Fred Neukomm and are recognised by his initial. There are no texts on the reverse of the stamps. Fred Neukomm (1905-1998) was born in Switzerland and mainly known for designing advertising posters.

Finally, several arms were wrong and these were corrected in later editions. All together, these changes mean that although the arms officially have 1363 images, 1910 different stamps exist.

The stamps were issued in sheets of 60, 12 rows of 5 stamps each. The sheets were printed in the sequence of the numbering in the albums. Below two examples of the sheets.

As in all countries where the Hag/Sanka albums were issued, a large advertising campaign was started.

For France I know of the following

In 1936 the company also organised a contest where you had to place the heraldic stamps accrding to colour or charge and send it to the company. Large prizes could be won, including a brand new car !

As well as the following menu cards

Special stamps were also issued, which were issued as advertising material. These differ from the normal stamps by the red name. 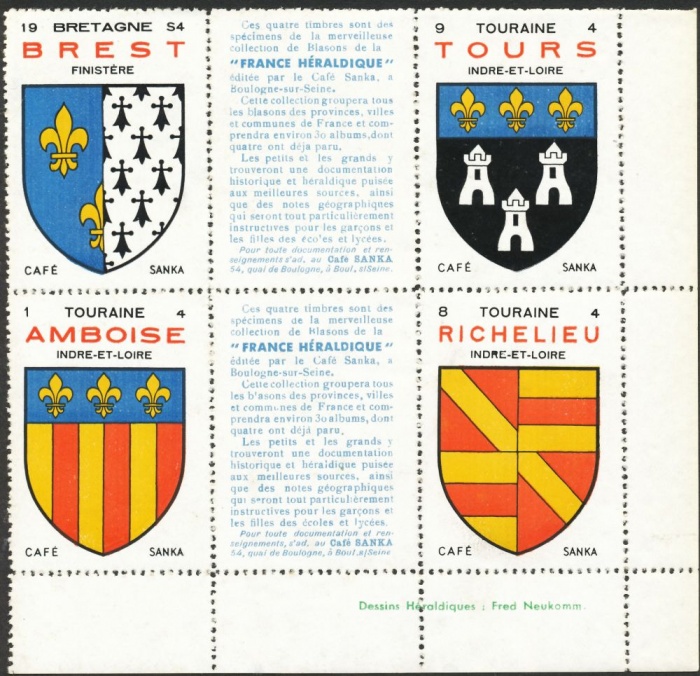 Another advertising stamp was issued, which was not part of the albums, but was part of the sheets when there was an empty space. 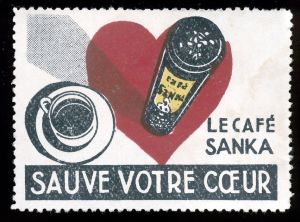 The company also paid (?) for editorials for the albums :

As the albums have been issued in several editions, there are some variations in the stamps as well as in the texts of the albums.

Besides the variations above is other 'variation' :

This is not a real variation. The official description mentions an arm coming from the (heraldic) left part of the shield holding a banner with a star. Both images are in accordance with the blazon and thus technically identical.

There are also two variations in the name

Variations in the texts

For all images see Sanka France