From Heraldry of the World
Your site history : Campion Hall (Oxford University)
Jump to navigation Jump to search 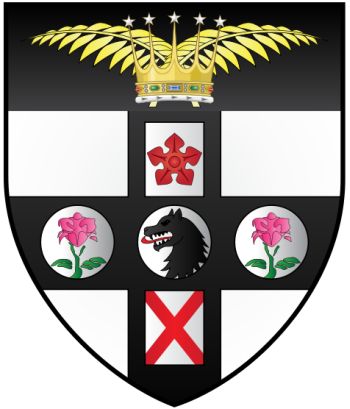 Argent, on a cross sable a plate charged with a wolf's head erased of the second, between in pale two billets of the field, that in chief charged with a cinquefoil and that in base with a saltire gules, and in fess as many plates each charged with a campion flower leaved and slipped proper; on a chief also of the second two branches of palm in saltire enfiled with a celestial crown Or.

The arms were officially granted on November 4, 1935.

If this text appears, it means that I have not yet had the time to add the information on these arms. Just Hall (Oxford University) mail me and I will add all information that I have !