From Heraldry of the World
Your site history : Canada Company
Jump to navigation Jump to search 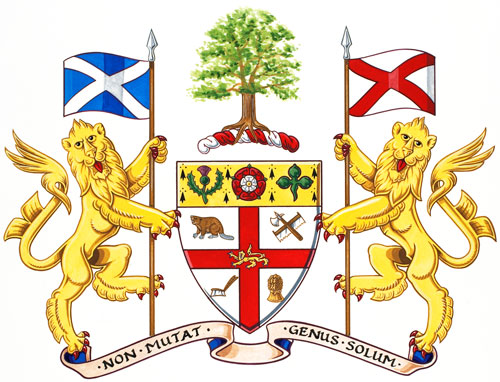 (UK grant)
Arms : Argent, on a cross of St George gules, a lion passant guardant or, in the first quarter a beaver, in the second a saw surmounted by an axe in saltire, in the third a plough, and in the fourth a garb, the whole proper, a chief erminois, thereon a rose gules charged with another argent, barbed and seeded proper between a thistle on the dexter side slipped and leaved and a trefoil on the sinister, both also proper.
Crest : On a wreath of the colours, an oaktree eradicated proper.
Supporters : On either side a lion guardant or, the dexter supporting a flag-staff proper, flowing therefrom a banner azure, charged with the cross saltire of St Andrew argent, the sinister supporting a like flag-staff with a banner argent, charged with the cross saltire of St Patrick gules.
Motto: "Non mutat genus solum."

(Canadian registration)
Arms : Argent on a cross Gules a lion passant guardant Or between in the first quarter a beaver statant in the second quarter a saw surmounted by an axe in saltire in the third quarter a plough and in the fourth quarter a garb proper, on a chief Erminois a Tudor rose between a thistle and a trefoil proper
Crest : An oak tree eradicated proper
Supporters : Two lions guardant Or each supporting a flag staff proper, the dexter flying a banner Azure a saltire Argent, the sinister flying a banner Argent a saltire Gules
Motto: NON MUTAT GENUS SOLUM

The arms were officially granted on ? (Grants registration xxxv. 213, 215; London) and registered as historical arms on August 15, 2012 (Canadian registration)

If you have any information on these arms Company mail us !