From Heraldry of the World
Your site history : Canada School of Public Service
Jump to navigation Jump to search 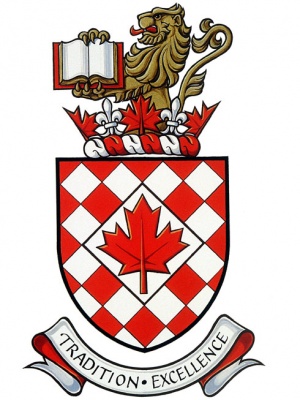 Arms : Lozengy Gules and Argent, a lozenge Argent charged with a maple leaf Gules
Crest : Issuant from a circlet of maple leaves Gules alternating with fleurs-de-lis Argent, a demi lion Or holding between its paws an open book Argent, edged Or, bound Gules
Motto: TRADITION • EXCELLENCE

The arms were officially granted on February 15, 2001 to the Canadian Centre for Management Development and again on June 15, 2004 to the Canada School of Public Service.

The lozenges in the shield represent the complex interactions that characterize human relationships, and the management grid. The maple leaf on the large lozenge represents the School itself, an institution at the heart of the grid, indicating its role in the development of public management in Canada. Red and white are Canada’s national colours.

The motto expresses, in both official languages, a foundation on which to build service.