From Heraldry of the World
Your site history : Canberra
Jump to navigation Jump to search 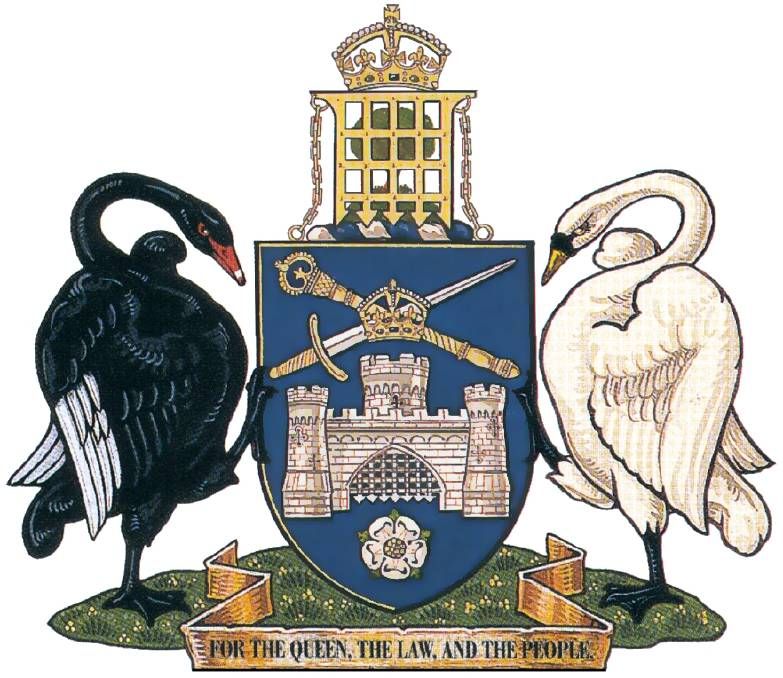 Arms : Azure, a triple towered Castle between in chief a Sword of Justice point upwards to the sinister Argent, pommel and hilt Or, sur­ mounted by a Parliamentary Mace head upwards to the dexter Gold in saltire charged at their point of intersection with a repre­ sentation of the Imperial Crown proper and in base a Rose also Argent barbed and seeded proper (being the Rose of York).
Crest : On a Wreath of the Colours in front of a Gum Tree issuant from a Mount proper a Portcullis chained Or ensigned with the Imperial Crown also proper.
Supporters : On the dexter side a Swan Sable beaked Gules and on the sinister side a white Swan proper.
Motto: 'For the Queen, the law, and the People'.

The castle in the arms has three towers, which signify dignity, importance and grandeur of the city. The sword of justice represents the national authority. The mace symbolises the law making power. The crown shows the role of the sovereign in Australian government. The rose is the rose of York, which commemorates the contribution of the Duke of York in establishing Canberra as the seat of government.

The portcullis or gate above the arms are the link to the arms of Westminster in England, seat of the British parliament. Behind the porticullis is a gum tree, which represents growth and progress of the city.

The swans symbolise the Aboriginal and European people.