From Heraldry of the World
Your site history : Cape Breton University
Jump to navigation Jump to search 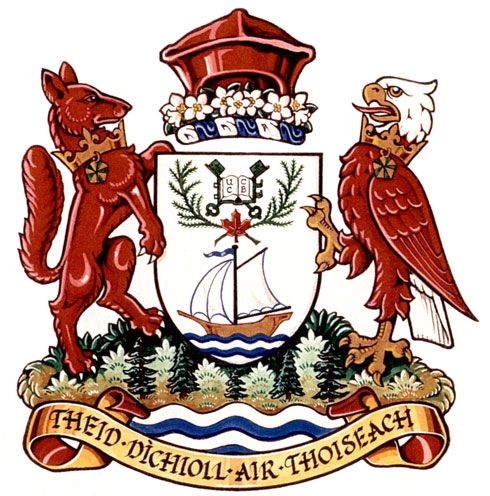 Arms: Argent upon two barrulets wavy Azure in base a representation of a Cape Breton sloop Or masted Sable sails Argent edged Azure in chief two keys in saltire wards upward and inward Vert surmounted by an open book proper inscribed in letters Sable dexter UC and sinister CB bound and clasped Vert all within two boughs of spruce Vert overlapping in saltire below the book and surmounted by a maple leaf Gules
Crest: Rising from a wreath of mayflowers proper a Canterbury cap Gules
Supporters: On a mound Vert set with spruce and fir trees proper rising above barry wavy Argent and Azure dexter a fox Gules armed Argent sinister a bald eagle Gules head and tail Argent beaked and membered and both gorged with a coronet flory Or pendant therefrom a pentagon gyronny of ten Vert and Or
Motto: THEID DÌCHIOLL AIR THOISEACH

The Cape Breton sloop is taken from the Great Seal of Cape Breton and honours this academic institution’s location. The wavy bands of blue and white suggest the ocean and the Bras d’Or Lakes. The spruce boughs honour the First Nations that were the first inhabitants of the island and the maple leaf refers to Canada. The keys convey the ideals attributed to the pursuit of knowledge within the context of a democratic society. The open book emphasizes these ideals and incorporates the institution’s acronym.

The circlet of mayflowers represents the province of Nova Scotia. The Canterbury cap is symbolic of higher learning and conveys that these arms belong to an academic institution.

The fox is known for its intelligence and indicates the intellectual pursuits involved in acquiring a degree. It is a reference to the university’s founder, Dr. Donald F. Campbell, known as the “silver fox”. The eagle is a majestic creature which continues the motifs of intelligence and idealism. It also honours the unique connections between the University College of Cape Breton and the Mi’kmaq community. The fox, the eagle and the rich greenery upon which they stand are native to the island and are a reference to the university’s beautiful surroundings.