From Heraldry of the World
Your site history : Capilano University
Jump to navigation Jump to search 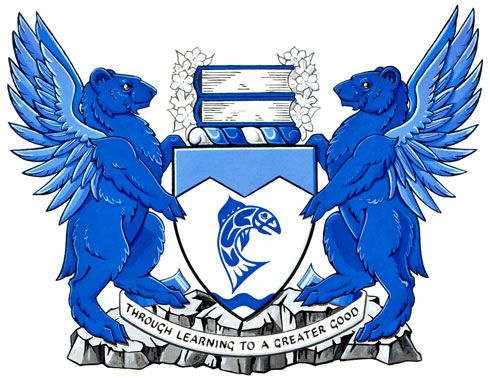 The arms were initially granted on September 15, 2010.

The salmon is an important local species, and is shown here in the artistic style of the original inhabitants of the North Shore area. The waves at the bottom of the shield indicate the university’s location near the Pacific Ocean, and the top section represents the nearby Coast Mountains. The white and the two shades of blue are the university’s colours.

The books are a traditional symbol of education, and the arrangement is inspired by the emblem used by Capilano College, the university’s predecessor. The maple leaves and dogwood flowers make reference to the fact that the university is located in Canada and British Columbia.

Bears are a local creature. In local First Nations mythology they are symbols of strength and are a link between the natural and supernatural realms. In mediaeval bestiaries, bears were said to give shape to their own young, and therefore bears can represent the forming of the young, a metaphor for education. The wings refer to the idea of aspiration and can allude to ravens, another local creature immortalized in First Nations mythology and associated with intelligence and creativity. The rocky base refers to the nearby Coast Mountains that are such a dramatic aspect of the local landscape.