From Heraldry of the World
Your site history : Cardiff
Jump to navigation Jump to search 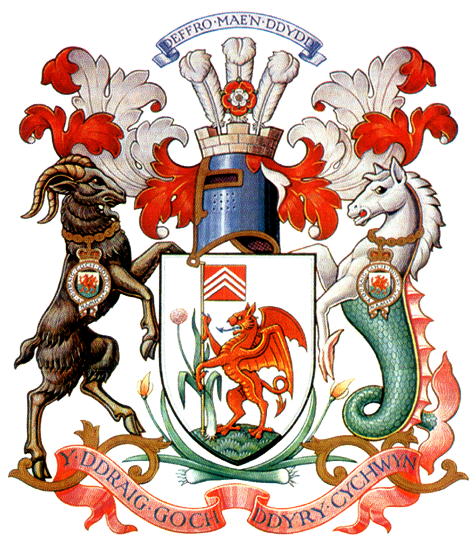 Arms : Argent on a Mount Vert a Dragon rampant Gules supporting in front of a Leek issuing from the Mount a Flag Staff erect proper flying therefrom to the sinister a Banner of the third charged with three Chevronels of the first.
Crest : A Tudor Rose on three Ostrich Feathers Argent issuing out of a Mural Crown proper; Mantled Gules doubled Argent.
Supporters : On the dexter side a Goat and on the sinister side a Sea Horse both proper as an Honourable Augmentation Her Majesty's Royal Badge for Wales, videlicet within a circular Riband Argent fimbriated Or bearing the motto Y DDRAIG GOCH DDYRY CYCHWYN in letters Vert and ensigned with a representation of the Crown proper an Escutcheon per fess Argent and Vert and thereon a Red Dragon passant pendent by a Golden Chain from the neck of each supporter.
Motto (above the shield) : 'DEFFRO MAE'N DDYDD'

The arms show the Red Dragon (the emblem of Wales) upholding a standard upon which is emblazoned the bearing of three chevrons argent upon red attributed to Iestin ap Gwrgant, the last Prince of Glamorgan, who lived in Cardiff Castle about 1030-1080. In later times, the bearings became the Arms of the Lords of Glamorgan and Cardiff. Thus the Welsh and Norman history of the City is suggested and the Chevrons of the former arms are retained. The Dragon plants the staff of the standard upon a green mount whereon he stands, and from which springs the leek (the floral emblem of Wales).

The motto beneath the shield reads 'Y ddraig goch ddry cychwyn' (the Red Dragon will lead the way).

The crest consists of a Tudor Rose and Three Ostrich Feathers argent, issuing out of a Mural Crown. The Three Ostrich Feathers form the badge of the Princes of Wales, and their use was specially authorized by Royal Warrant. The Tudor Rose and the Mural Crown (part of the old Arms of Cardiff) are reminiscent of the past history of the City.
The motto for the crest reads ' Deffro mae'n ddydd' (Awake, it is day).

The supporters are, on the dexter side, a Welsh goat (an ancient emblem of the mountains of Wales), and on the sinister side, a hippocamp or sea-horse (representing the Severn Sea and the carrying trade of the port). The Royal Badge for Wales is pendant by a golden chain from the neck of each supporter, pursuant to Royal Warrant and Authority of Her Majesty Queen Elizabeth II following the recognition of the City of Cardiff as the Capital of Wales.

As a whole, the Arms depict the status of the City and County of Cardiff as the metropolitan city of Wales and its commercial position linking the mountains with the sea. The crest and the Royal Badge denote special Royal favours to the City as well as its fealty to the Crown. The accessories touch symbolically upon the ancient traditions of the City.