From Heraldry of the World
Your site history : Casterton School
Jump to navigation Jump to search 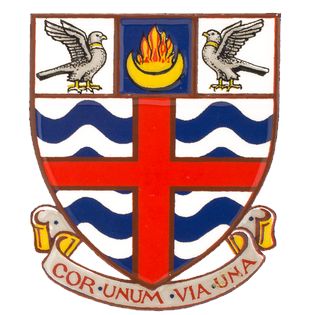 Arms: Barry wavy argent and azure, a cross gules; on a chief argent between two falcons rising sable, beaked, legged and collared Or, the dexter contournee, a pale azure charged with a crescent Or, issuant therefrom flames proper.
Motto: Cor unum, via una

The arms were officially granted on August 1, 1963.