From Heraldry of the World
Your site history : Castleford
Jump to navigation Jump to search 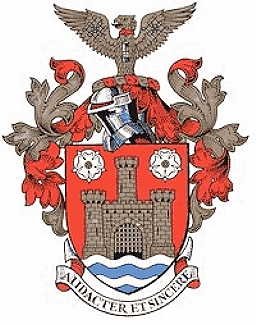 Arms : Gules on Water barry wavy in base proper a triple-towered Castle Or in chief two Roses Argent barbed and seeded proper.
Crest : On a Wreath of the Colours a demi Eagle Or gorged with a Collar Gules pendent therefrom a Miner's Lamp proper and charged on each wing with a Lacy Knot Sable.
Motto: 'AUDACTER ET SINCERE' - Boldly and frankly

The arms were officially granted on March 3, 1952.

The name of Castleford is indicated by the gold castle and the ford of white and blue waves upon the shield. The white roses indicate the situation of the town in the West Riding of Yorkshire.

The gold Roman eagle represents the fact that the town stands on the site of a Roman station and the a miner's safety lamp, alludes to the local coal-mining industry. On each wing of the eagle is the badge of the Laceys, Earls of Lincoln and Lords of the Honour in which Castleford used to lie.