From Heraldry of the World
(Redirected from Cazenove and Co)

Your site history : Cazenove and Co.
Jump to navigation Jump to search 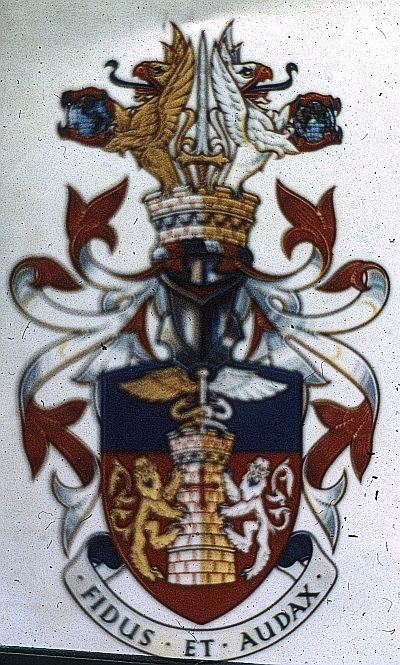 Arms: Gules a chief Azure overall and supported in the Gules by dexter a lion rampant guardant contourny Or and sinister a lion rampant guardant Argent a tower per pale Argent and Or masoned and fenestrated cruciformly Gules issuing from the battlements thereof a Caduceus per pale Or and Argent.
Crest : Upon a helm with a wreath Argent Gules and Azure out of the battlements of a tower top per pale Argent and Or masoned Gules two Griffin's addorsed the dexter Or the sinister Argent both beaked and legged Gules and holding between the claws a terrestrial globe the dexter depicting the Western hemisphere and the sinister the Eastern hemisphere both proper between the Griffin's a sword erect point upwards Argent hilt pommel and Quillons Gold. Mantled Gules and Argent.
Motto: Fidus Et Audax

The arms were officially granted in March 1984.

The shield is based upon the Cazenove family arms, but there has been added, as a general symbol of industrial and commercial activity such as Cazenove & Co., encourage by its special skills and services, a Caduceus or Rod of Mercury which issues from the battlements of a tower which is placed between two lions rampant guardant. These, in the watchful position of looking forwards to a spectator, are shown gold and silver respectively, and the tower and Rod of Mercury are also divided of these heraldic metals symbolic of investment and development.

Red and silver, or white, are the City colours and hence the original foundation of the firm and its location today are referred to, while azure in the chief can be regarded as the token of the way in which the Company have expanded their activities overseas.

The crest, placed upon a helm which is affronty with mantling of red and white and a crest wreath which repeats three of the tinctures of the shield, consists of the top of a tower argent and or, masoned gules on which appears a sword in the same position as that of the City of London, thus providing another reference to the firm as a City one. On each side of the sword and issuing out of the tower is a Griffin, one tinctured gold and the other silver with red beaks and legs. In ancient mythology the griffin was characterised as the guardian of treasure. Each griffin holds a terrestrial globe, one depicting the western hemisphere and the other the eastern, thus constituting an adequate representation of the range of the Company's activities and branches outside the United Kingdom.

The motto means 'Faithful and Bold'.