From Heraldry of the World
Your site history : Cerrina de Clare
Jump to navigation Jump to search 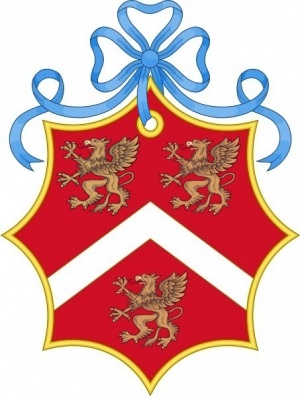 Gules a chevron Argent between three griffins segreant Or

The white (argent) chevron is incorporated to honor the armigers de Clare ancestors and those from the Counts of Perche as well as peace and sincerity. It symbolizes the great achievements to humanity these great noble houses had on human society. The griffin symbolizes watchfulness and the courage of the armiger and her family ancestors. The Griffin was thought to find and guard mines of gold and hidden treasures. Here there are three golden Griffins for the kindness and generosity of the armiger. There is one Griffin for the armigers bravery, one for her valor and one for her endless vigilance.