From Heraldry of the World
Your site history : Chartered Institution for Further Education
Jump to navigation Jump to search 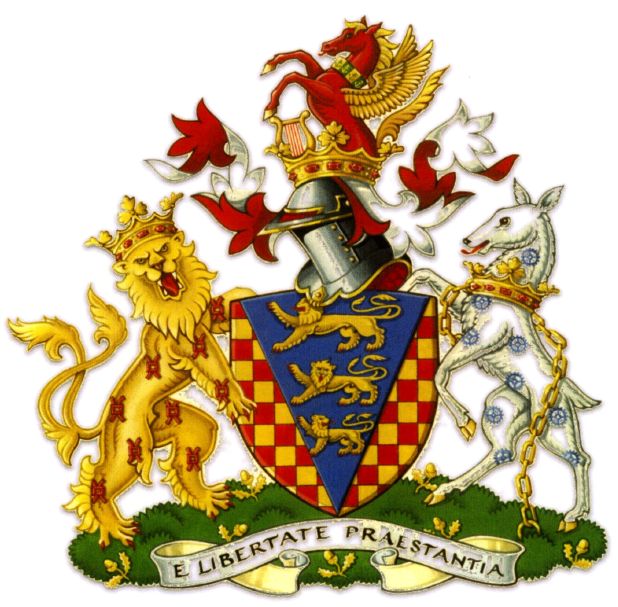 Arms : Checky Or and Gules on a Pile throughout Azure three Lions passant in pale that in the centre guardant and that in the base reguardant all double-queued Or.
Crest: Upon a Helm Issuant from a Coronet Or jewelled Gules a Demi-Pegasus also Gules queued winged maned and unguled Or gorged with a Collar compony Vert and Or charged with Anchors counterchanged resting the sinister hoof upon a Lyre Or stringed Gules Mantled Gules doubled Argent.
Supporters: Dexter: a Lion guardant double-queued Or the body and legs semy of Millrinds Gules crowned with a Coronet Or jewelled Gules. Sinister: A Hind Argent the body and legs semy of Cogwheels Azure unguled and gorged with a Coronet Or jewelled Gules attached thereto a Chain reflexed round the back terminating in a fracted annulet Or the whole upon a grassy Mount Vert strewn with Acorns leaved Or.
Motto: E Libertate Praestantia

The arms were officially granted on December 7, 2015.

The checky shield is for the financial sector and also for the building industries, the three lions on a blue pile (the V is for Vocation) are redolent of the English Sovereign's Arms, one lion faces backwards to the craft heritage of the country, one looks outwards to the present and the third forward to the future.

The coronet from which the crest rises and those on the supporters symbolise the Royal Charter.

The supporters are an English lion semé of mill rinds for the agricultural industries and a hind symbolising the emergence of women into many vocational areas (such as engineering, hence the cog wheels). The hind sports a chain with a part annulet at the end for she has broken free of those difficulties which have held women back in many occupations.

The Pegasus which stands for both the creative and the aviation industries, places one foot on a harp for the musical professions, around his neck is a collar compony of anchors for the maritime industries and also as a reminder of the chairman, Lord Lingfield, for there is a similar collar on his own Bagwyn crest.