From Heraldry of the World
Your site history : Chas Charles-Dunne
Jump to navigation Jump to search 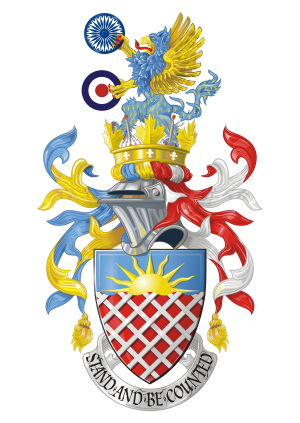 Shield - Gules fretty Argent on a chief wavy Bleu Celeste a rising sun Or. Mantling - Parted per pale to dexter Bleu Celeste doubled Or and to sinister Gules doubled Argent. Torse - Or Bleu Celeste Or Gules Argent Gules. Crest - Rising out of a band pierced by 6 fleur-de-lys (3 showing) set with 4 maple leaves (3 showing) Or between 4 thunderbolts Argent enflamed Proper (2 showing) a griffin Bleu Celeste beaked legged winged and ermined in the hind quarters Or armed and langued Gules clutching in the dexter talon an Indian 24 spoke Wheel of Life Azure and in the sinister a Royal Air Force roundel Proper. Motto - Stand and be Counted

The shield has no symbolism. The crest alludes to the armiger's land of birth, his career, affiliations and aspirations.