From Heraldry of the World
Your site history : Chatham
Jump to navigation Jump to search 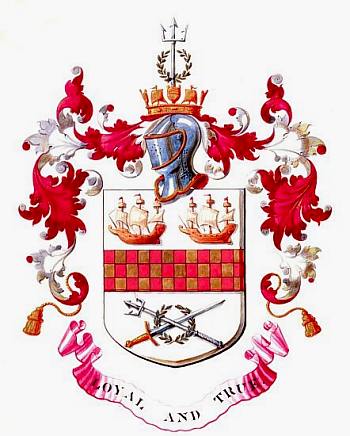 Arms : Argent a Fesse chequy Gules and Or between in chief two ancient Ships with three masts and sails proper colours flying of the second and in base a Sword of the fourth pommel and hilt of the third surmounted by a Trident in saltire and entwined with a Wreath of Laural proper.
Crest : Out of a Naval Crown Or a Trident erect enfiled with a Wreath of Laurel proper.
Motto: 'LOYAL AND TRUE'

The arms were officially granted on August 1, 1891.

The red and gold checky fess is derived from the arms of the Pitt, family Earls of Chatham, two of whom provided Prime Ministers of Great Britain. The rest of the arms refer to the town being an important base of the British Royal Navy.