From Heraldry of the World
Your site history : Chelsea Building Society
Jump to navigation Jump to search 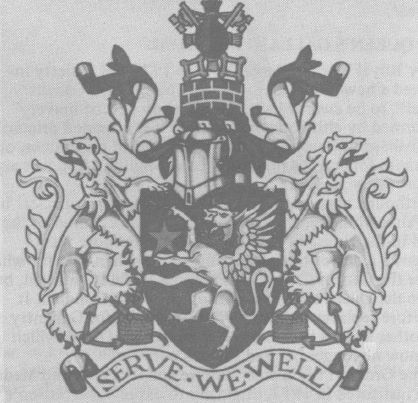 Arms: Gules, a fess wavy argent charged with a bar wavy azure, over all a winged bull rampant argent, armed unguled gorged with a crown and holding between the forelegs a mullet Or.
Crest: On a wreath of the colours on a mount vert a wall gules masoned argent, surmounted by two keys in sal-tire wards upward and outward pendent from the wards by the strings Or, a purse per pale gules and sable tasselled Or.
Supporters: On either side a lion reguardant argent, resting the interior hind leg on an anchor that on the dexter in bend sinister the stock resting on the cable coiled to the sinister Or that on the sinister in bend the stock resting upon the cable coiled to the dexter Or.
Motto: Serve we well

The arms demonstrate the Society's links with the Chelsea area. One of the supporters in the arms of the Royal Borough of Kensington and Chelsea is a winged bull — symbol of St. Luke, patron saint of Chelsea parish. The arms of both of the former Metropolitan Boroughs of Chelsea and Camberwell had red fields and charges of silver. The blue bar and the anchors represent the Thames and its users.

The crest seems to sum up everything that a Building Society stands for: the security of houses, of their tenure, and of the investors' savings. A silver lion rampant, used here as supporter, featured in the former Chelsea Borough's arms and was thought to have been derived from the Cadogan family's lion. The Cadogans, Lords of the Manor, derived the manor by marriage with a daughter of Sir Hans Sloane, the physician, Mayor and antiquary whose collection formed the origins of the British Museum.