From Heraldry of the World
Your site history : Cheltenham College
Jump to navigation Jump to search 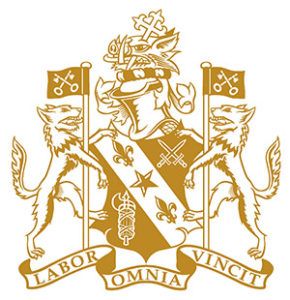 Arms: Per bend gules and sable, on a bend Or between in chief two swords in saltire proper, pommels and hilts of the second, and in base a fasces palewise of the last, a mullet of the first between two fleurs de lys of the second.
Crest: On a wreath Or and sable, A boar's head erased sable transfixed by a cross flory fitchy argent.
Supporters: On either side a wolf argent supporting between the forelegs a staff Or, flying therefrom a banner azure charged with two keys in saltire Or.
Motto: Labor omnia vincit