From Heraldry of the World
Your site history : Cheshire Police Authority
Jump to navigation Jump to search 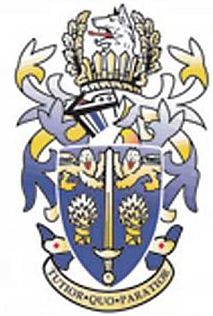 Arms : Azure, between two garbs in fesse a sword erect supported in chief by two lions passant guardant issuant from the flanks, all Or.
Crest: On a wreath of the colours, Within two sprays of oak a crown palisado Or, issuant therefrom a wolf's head argent.
Motto: Tutior quo paratior.

If you have any information on these arms Police Authority mail us !