From Heraldry of the World
Your site history : Chichester
Jump to navigation Jump to search 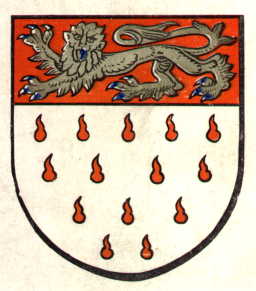 Argent Guttée-de-Sang on a Chief Gules a Lion passant guardant Or.

The arms above are of the old city and borough of Chichester and are still used by the city council.

The meaning and origin of the arms is not known.