From Heraldry of the World
Your site history : Chitungwiza
Jump to navigation Jump to search 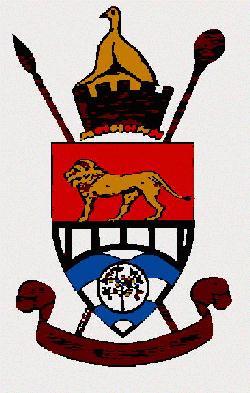 Arms : Per fess gules and barry wavy argent and azure, a fess sable the base enarched voided argent and charged with fine palets also sable. In chief a lion statant issuant Or and in base plate charged with "Nhuudurwa" (Nhumdurwa) plant proper behind the escutcheon in saltire to the dexter a pear and to the sinister a knobkerrie both proper.
Crest: On a unearth of the colours a murial crown issuant therefrom the Zimbabwe Bird Or.
Motto: PAMBERI NEKUSHANDIRA PAMWE (Marching Forward in Co-operation)

The arms were officially granted on October 6, 1986.

Chitungwiza was formed in 1978 by the amalgamation of three African townships to form a residential dormitory for the capital.

Chitungwiza has not had the colonial influence which has been prevalent in the arms of the other municipal areas in Zimbabwe. We have no information on the meaning or origin of these arms.