From Heraldry of the World
Your site history : Christ Church College (Oxford University)
Jump to navigation Jump to search 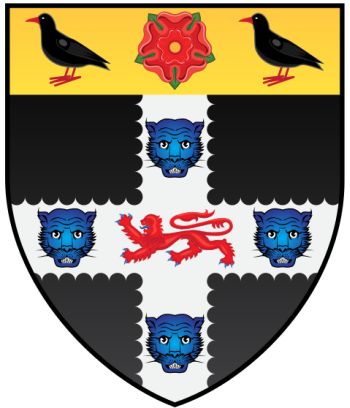 Sable, on a cross engrailed argent a lion passant gules between four leopards' faces azure; on a chief Or a rose of the third barbed and seeded between two Cornish choughs proper

The foundation of the College was the project of Cardinal Wolsey (it was to be called Cardinal's College) but it was completed by Henry VIII and given its present name. The College arms are those granted to Wolsey, namely; sable, on a cross engrailed argent, a lion passant gules, between four leopards' faces azure (the cross and leopards' faces are from the arms of Ufford and de la Pole, some time Earls of Suffolk, which was Wolsey's county. The lion refers to Pope Leo X who created him a Cardinal), then on a chief or, a rose gules barbed and seeded proper, between two Cornish choughs sable, beaked and membered gules (the rose is for England and the choughs are from the hypothetical arms of Wolsey's patron St. Thomas of Canterbury).