From Heraldry of the World
Your site history : Christopher Liam O'Connor
Jump to navigation Jump to search 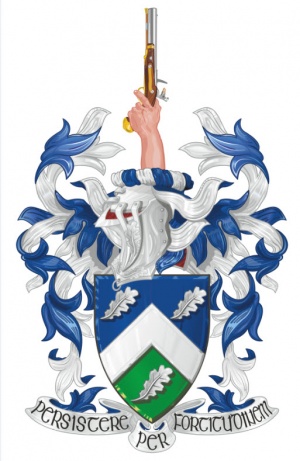 The oak leaves are also derivatives of the oak tree element of the O'Connor arms from Ireland. The armiger had served in the three components of the United States Army: the Regular Army, the Army Reserve, and the Army National Guard.

In the crest, the 1805 Harper's Ferry pistol represents the armiger’s Military Police service. Since the armiger is left-handed, the pistol is grasped by a sinister cubit arm.

Registered as an original design by U.S. Heraldic Registry.