From Heraldry of the World
Your site history : Ciney. > Ciney
Jump to navigation Jump to search 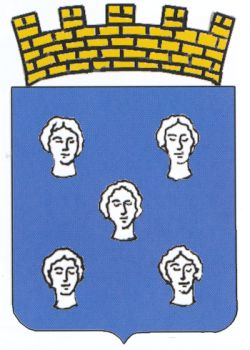 The arms show five human heads.
The five heads first appear on a seal of the city dating from 1632. Ever since the heads are the arms of the city. The meaning of the heads is not known, although there are several legends mentioned as explanations.

The first legend states that Ciney was supposedly founded by Sedros, King of Tongeren. His son, Prince Clement, bore quins (5 sons), and renamed his city Chynée (from Cinq-née or five-born).

Another explanation is that the heads refer to the story in which St. Martin of Tours resuscitates five drowned children.

A third story mentions that the arms are supposedly canting for "cinq nés" or five noses. 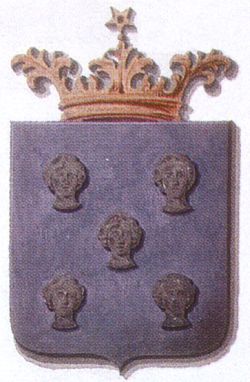 The previous arms were granted on July 19, 1841 and differ only in the type of crown and the star above the crown.