From Heraldry of the World
Your site history : City of London Solicitors' Company
Jump to navigation Jump to search 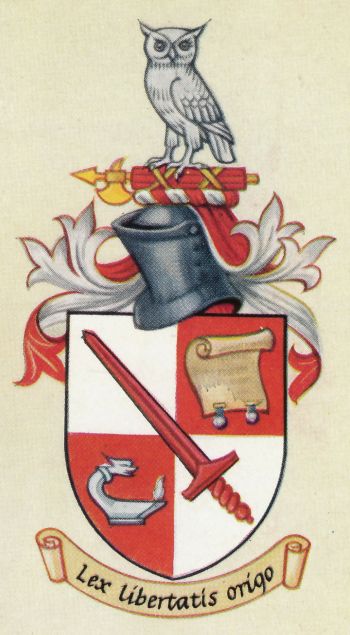 Arms : Quartedy argent and gules in sinister chief a deed with seals pendent Proper, in dexter base-a Roman-lamp of the first, over all a sword point upwards in bend of the second.
Crest: On a wreath of the colours upon a fasces fessewise rods gules, axe and binding or an owl argent.
Motto: Lex libertatis origo

The arms symbolise the debt that English law owes to ancient Rome. The deed clearly is a symbol of a legal document, the sword is a symbol of justice and the lamp symbolises 'the Roman legal precepts that still illuminate the administration of justice'.

The motto means : Freedom's foundation is the Law