From Heraldry of the World
Your site history : Clare (county)
Jump to navigation Jump to search 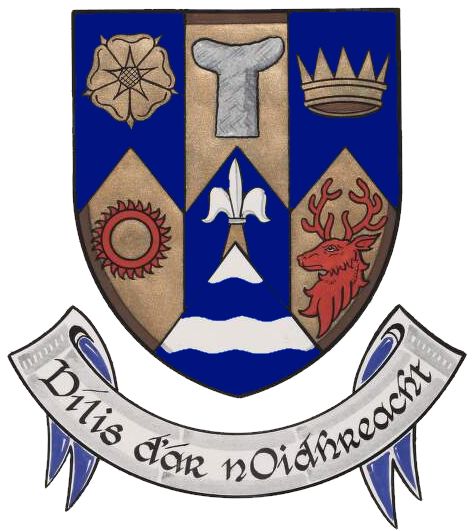 Per fesse dancettée azure and or, on a pale counterchanged between in chief in the dexter a rose and in the sinister an antique crown of the second and in base in the dexter an annulet rayonnée and in the sinister a stag's head erased gules, in chief a tau cross proper and in base a pile reversed of the second floried at the point argent; a point pointed barry wavy of four of the last and of the first. Motto: Dilis d'ar noidhreacht

During 1986, the Council introduced this Coat of Arms signifying six symbols relevant to County Clare with the principal colours of the shield (azure and blue) grounded on the sporting colours of the county. The purpose of the design is to evolve an appropriate heraldic design which truly reflects the topography, history and achievements of County Clare.

The shield is specifically designed to convey the effect of both the flat and craggy landscape of the County. The six compartments into which the shield is divided are intended to represent the six ancient areas - Dal gCais, Clann Cuilean, Ui Caisin, Corcumrua, Corca Baiscinn and Ui Breacain, that comprise the present day county. (a) The rose motif, which has been abstracted from the shield of the old diocese of Kilfenora is designed to typify the Burren.
(b) The tau cross (Kilnaboy) has been chosen to represent the rich heritage of antiquity for which the County is noted.
(c) The antique Irish Crown symbolises the ancient Kingdom of Thomond, which comprehended most of the present County
(d) The pile reversed fleuried at the point is suggestive of aircraft lift-off over the Shannon River, thereby symbolising Shannon International Airport. (e) The stag's head is intended to commemorate the many Clare families whose shields and crests bear this motif viz., Meehan, Curtin, Cullinane, Hehir, O'Connor, O'Connell and many more.
(f) The circle of fire symbolises the electricity producing installations. i.e. Moneypoint and Ardnacrusha, Co. Clare.

The barry wavy effect at the base of the shield suggests the River Shannon that is a boundary feature for so much of the County.

The motto 'Dilis d'ar noidhreacht' (True to Our heritage) was the suggestion of Rebecca Maher, Ennis, after the Council invited applications from the various schools for appropriate slogans.