Coast Defenses of Cristobal, US Army

From Heraldry of the World
Your site history : Coast Defenses of Cristobal, US Army
Jump to navigation Jump to search

COAST DEFENSES OF CRISTOBAL, US ARMY 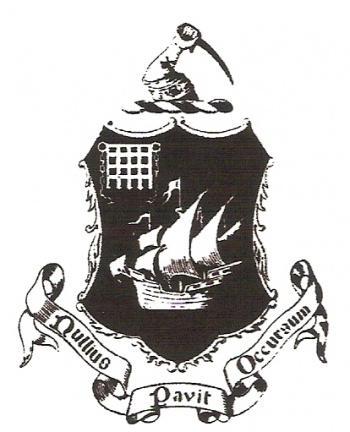 The shield is red with a Caraval in gold and in the canton a Portcullis in silver. The Caraval symbolises the landing of Columbus in 1502 at Chagres River. The Portcullis symbolises the Panama Canal, when open unites the Oceans but when closed by the defences it bars the way of the enemy. The Crest is a Pirate's Arm tattooed with Skull and Crossbones, having on the upper arm a sleeve of white and green with crimson cuff and gold buttons, the hand brandishing a priate's cutlass in black. The Motto Nullius pavit occursum translates as He fears no encounter and refers to both the old buccaneers and the modern defenders.