From Heraldry of the World
Your site history : Coastal Patrol Ship USS Monsoon (PC-4)
Jump to navigation Jump to search 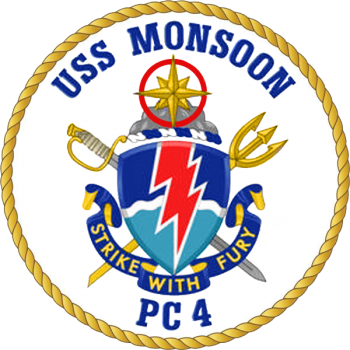 Snield: Per fess arched Azure and Celeste a barrulett arched wavy Argent, issuing from chief a lightning bolt throughout Gules fimbriated of the third.
Crest: Issuing from a wreath of the colors (Argent and Azure) a storm cloud Proper, overall a compass rose Or garnished Gules.
Motto: A tripartite scroll Azure doubled and inscribed “STRIKE WITH FURY” Or.
Supporters: A United States Navy sword and a trident saltirewise Proper.
Seal: The coat of arms as blazoned in full color upon a white disc edged with a gold rope and inscribed “USS MONSOON” above and “PC4” below in blue.

Dark blue and gold are the colors traditionally associated with the Navy. Red denotes action and valor while the light blue and wavy white arch recall coastal waters and the shoreline. The strength and fury of a monsoon is represented by the lightning bolt. The lightning also symbolizes quick response and the electronic capabilities of the USS MONSOON. The storm cloud is expressive of the violent rains that come with a monsoon. The compass rose, highlighting navigation and the cardinal points of the compass, underscores the mission of the ship: to conduct coastal patrol, to detect illegal activities and to carry out interdiction operations. The trident, adapted from the Naval Special Warfare insignia, is crossed Navy sword and refers to the ship’s mission of providing support for the Special Warfare Forces.