From Heraldry of the World
Your site history : Coastal Patrol Ship USS Tornado (PC-14)
Jump to navigation Jump to search 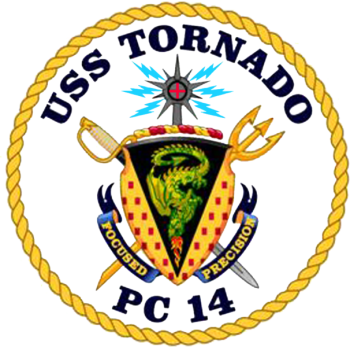 Shield: Or, billetty Gules, on a pile Sable a dragon urinant of the first detailed Vert breathing flames to the base Proper.
Crest: From a wreath Or and Gules a demi-mace Argent radiating six lightning bolts Celeste and charged with two sighting lines crosswise of the second encircled by an annulet Sable.
Supporters: United States Navy Sword Proper snd a trident saltirewise Or.
Motto: A bipartite scroll Azure doubled and inscribed "FOCUSED PRECISION" Or.
Seal: The Coat of Arms as blazoned in full color upon a white disc edged with a gold rope inscribed "USS TORNADO" above and "PC 14" below in blue.

The colours dark blue and gold are the colours traditionally used by the US Navy. The black pile suggest the funnel of a Tornado, it i charged with a dragon symbolising the ferocity and violence of a Tornado. The red billets higlight the confusion and havoc left by the storm. The Mace a symbol of authority symbolises the Ship's law enforcement mission. The Lightning Blots symbolises the electronic capabilities of the Ship. The Trident from the Naval Special Warfare Insignia and the Navy Sword symbolise the Ship's mission of providning support for Special Warfare Forces.