From Heraldry of the World
Your site history : Collège Esther-Blondin
Jump to navigation Jump to search 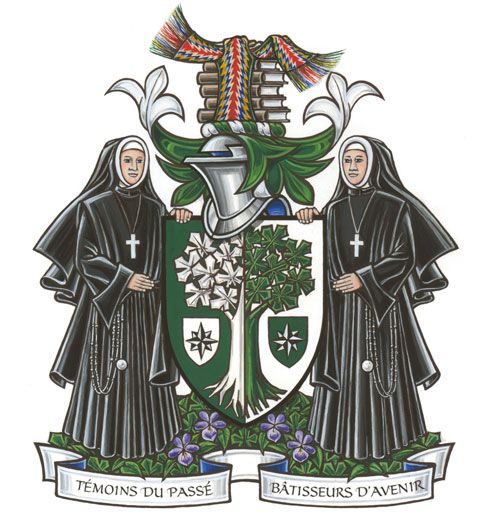 Arms: Per pale Vert and Argent, a maple tree eradicated between two escutcheons counterchanged, each escutcheon charged with a compass rose Argent and Sable
Crest: A stack of books bound with an Assomption sash proper
Supporters: Two nuns of the Congregation of the Sisters of Saint Anne standing on a compartment of maple leaves and Canada violets proper
Mottoes: TÉMOINS DU PASSÉ • BÂTISSEURS D’AVENIR

The shield is green and white, the traditional colours of Collège Esther-Blondin. The vertical division of the shield represents the co-educational character of the college, a revolutionary proposal championed by the community’s founder. The two halves of the shield also represent the college’s two main programs: the regular high school education program and the International Baccalaureate program. The tree in the centre, a sugar maple, symbolizes life, growth and the idea of renewal. It recalls the Bois des érables, where the college was first built. Its visible roots indicate the attachment that the students, teachers and staff have to the college, its history and its traditions. The tree and its roots also represent work over the long term, the results of which are not always immediately evident, but which nevertheless bear fruit. The compass roses on the shields represent the college’s international dimension and symbolize the college’s role in guiding its students’ future.

The books symbolize the five years of high school as well as the knowledge and education the college imparts. The Assomption sash recalls the Lanaudière region and, with its intertwined chevrons, represents the spirit of unity that is so alive at the college.

The supporters represent Anne, born Marie-Esther Sureau dit Blondin, founder of the Congregation of the Sisters of Saint Anne, and Sister Marie-Jeanne-de-France, founder and first director general of the École supérieure d’Enseignement ménager founded in Saint-Jacques in 1949. The establishment, successively called the Institut Familial, the Institut Esther-Blondin and currently Collège Esther-Blondin, today perpetuates the educational work begun by the founder of the Congregation, who is often represented by the Canada violet.

The motto means “Witnesses of the past, creators of the future”.