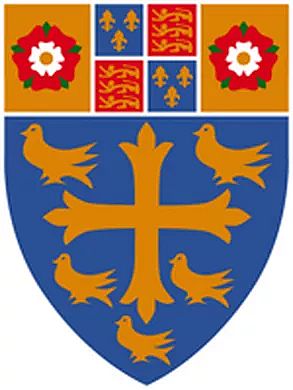 Azure, a cross patonce between · five martlets Or; and on a chief Or a pale quarterly of France Modern and England between two roses gules barbed and seeded proper.

According to tradition a certain rich citizen of London built a church to St. Peter at Westminster, in an island in the marshes of the Thames and then called Thorney. in the days of Aethelberht, King of Kent (d. 616). On the eve before its consecration by Mellitus, Bishop of London, was due to be celebrated, the church was consecrated by St. Peter himself with the aid of a celestial choir. Such was the story told by the Westminster monks in the eleventh century and a century later the "rich citizen" had come to be identified with Sebert, King of Essex.

The present Abbey Church was founded by St. Edward the Confessor, who was buried in the Abbey, which was consecrated December 28, 1065. William I chose to be crowned in the church where King Edward lay and thus set the precedent for the subsequent coronations in the Abbey. The Abbey was surrendered to the Crown by the last Abbot, William Boston, and twenty-four monks on January 16, 1540. It was erected into a cathedral church with a dean and twelve prebendaries by King Henry VIII on December 17, 1540, the Abbot becoming Dean. Thomas Thirlby was made Bishop of Westminster and given the abbot's house for his residence. His jurisdiction included the whole of Middlesex (except Fulham), taken out of the diocese of London.

Under Edward VI the bishopric was surrendered and suppressed in March 1550 and the county of Middlesex restored to the See of London by an Act of 1552 (5-6 Edw. VI, c. 11), the abbey church with its dean and chapter being united to the bishopric of London. The church was re-established as a monastery by Queen Mary I by licence from Cardinal Pole, December 15, 1556, under John Feckenham, Dean of St. Paul's, as Abbot. The death of Mary was followed by the suppression of the monastery, July 12, 1559, and on May 12, 1560 Queen Elizabeth I refounded the collegiate church, consisting of a dean and twelve prebendaries. Her foundation, though somewhat modified in the nineteenth century, remains today.