From Heraldry of the World
Your site history : Colour Group
Jump to navigation Jump to search 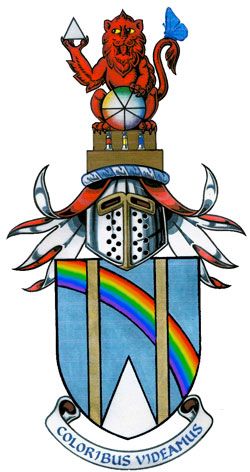 Arms: Bleu Celeste a Rainbow bendwise enarched throughout proper surmounted by two Pallets Or abutting a Pile reversed in base Argent.
Crest: Two stone Steps upon the lower three Tubes of Oil Paint palewise proper and upon the higher a Lion sejant affronty Gules supporting between the rear legs with the sinister forepaw a Newton’s Disc the colours fading towards the centre proper and holding aloft in the dexter forepaw a Prism Argent the tail disposed to the sinister perched thereon a Morpho Butterfly Azure.
Motto: Coloribus videamus

The arms were officially granted on September 30, 2013.

The Colour Group was founded in 1940 by Professor W.D.Wright of Imperial College as the first of the specialist groups within The Physical Society, and soon attracted those with an interest in the science of colour from many different disciplines - chemistry, biology, photography, paint manufacture, architecture and so on, as well as physics. When the Society was absorbed into The Institute of Physics in 1961, the Group became incorporated as an independent body on 11th November, 1961.

The arms show a prisma and rainbow, obvious symbols for colour research.

The red lion (for Great Britain) sits on two steps (to represent achievement) holding up a prism (for optical science) and supporting between his legs a version of Newton’s Disc delicately coloured in, which was the first attempt to make a chromaticity diagram (to represent colorimetry), while on his tail perches a Morpho butterfly, the object of one of Professor Wright’s researches (for colour in nature), and on the step are three tubes of coloured paint which the artist has made red, yellow and blue (to represent both the colorant manufacturing industry and the artists and designers who use these products).

The motto translates as “Through colour let us see."