From Heraldry of the World
Your site history : Colwyn Bay
Jump to navigation Jump to search 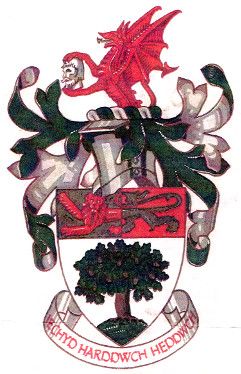 Arms: Argent, on a mount vert an oak tree proper, fructed Or; on a chief per pale of the last and gules a lion passant guardant counterchanged.
Crest: On a Wreath of the Colours a demi dragon gules holding between the claws a man's head in profile couped at the neck argent.
Motto: 'IECHYD HARDDWCH HEDDWCH' - Health, beauty, tranquillity.

The oak tree is from the device formerly used by the Urban District Council (see postcard below). The lion is derived from the arms of the Principality of Wales, which are those of Prince Llewelyn, with whom the district has historic associations.

The wreath and mantling are in the Tudor livery colours and the Welsh dragon is the national emblem. The Saxon's head from the arms of Ednyfed Fychan, who displayed three heads in his shield in token of his victories against the English army under Ranulph, Earl of Chester.

The arms are now used by the Bay of Colwyn Town Council.