From Heraldry of the World
Your site history : Copeland
Jump to navigation Jump to search 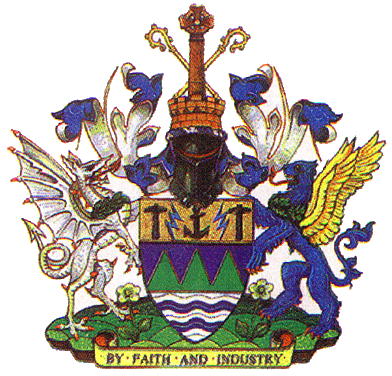 Arms : Per fesse dancetty of the points in chief Azure and Vert on a plain Base Argent two Barrulets wavy Azure on a Chief Or between two Flashes of Lightning palewise throughout also Azure an Anchor all between two Miners’ Picks heads upwards Sable.
Crest : On a Wreath Argent and Azure out of the Battlements of a Red Sandstone Tower proper in front of two Abbatial Crosiers in saltire the heads upwards and outwards Or a representation of the ancient Cross at Gosforth issuant proper; Mantled Azure and Argent.
Supporters : Dexter a Dragon wings elevated and addorsed Argent gorged with a Wreath of Laurel proper sinister a Lion Azure winged Or gorged with a Wreath of Oak also proper the Compartment comprising of a grassy Mount growing therefrom on either side of the Shield a Parnassus Grass Flower (Parnassia Palustris) stalked and with two leaves at the base proper.
Motto: By faith and industry

The arms were officially granted in 1990. Before this the council the old (unofficial) arms of Whitehaven.

The shield shows three stylised peaks in green to suggest such well-known mountains as Great Gable, Scafell and Scafell Pike, set against an azure blue sky, with at their base white and blue waves for the lakes, rivers and sea. The chief depicts the traditional industries with an anchor for the ports and picks for coal and iron mining, all black on gold, the heraldic colours of the Lowthers, who from the late 17th century were so influential in developing these activities, especially in the Whitehaven area. Two blue flashes of lightning refer to the modern electrical industry served by the Sellafield and Calder plants.

The crest indicates the historic antiquities of the area. The battlemented tower represents the castles and strongholds such as Muncaster, Whitehaven, Egremont, Millom, Walls Castle and Hardknott Fort. Two crossed gold crosiers refer to St Bees Priory and Calder Abbey, linked with the early monastic influence in the government and economy of the area, and particularly the purchase of Copeland ('Kaupland' = 'bought land') from the St Bees Estates. In front of these stands the Gosforth Cross, said to be the tallest ancient cross in England, dating from the 7th Century.

The supporters commemorate some of the historic families associated with Copeland. The white dragon is the crest of the Lowthers, used as such in the former Whitehaven Borough Council's device; here it stands as a supporter and round its neck is the wreath of laurel which encircles the neck of the family's white horse supporters. The blue lion with gold wings is one of the supporters of the arms of the Wyndhams of Egremont; without its wings the lion also has that of Percys, allied to the Lucys; the two families' quartered arms were borne by their Priory of St Bees. The lion wears round the neck the wreath of oak from the arms of the Penningtons of Muncaster.

The whole stands on a grassy base suggesting the rural areas; growing from it are two Parnassus flowers recalling those in the arms of the former Cumberland County Council.

The motto - By Faith and Industry - links the historic influences of the monastic era and the industrial life of modern times. Faith also alludes to the determination and confidence of Copeland in recovering from its period of decline.