From Heraldry of the World
Your site history : Cork
Jump to navigation Jump to search 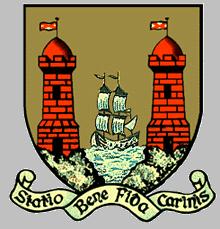 Or, on waves of the sea a ship of three masts in full sail proper between two towers gules upon rocks also proper each tower surmounted by a flag argent charged with a saltire of the third with the motto STATIO BENE FIDA CARINIS.

The city’s old corporate seals show a ship sailing between two castles or towers, and these evolved into the arms now in use. The arms varied before their registration in 1949, sometimes simply showing a ship between two towers.

The white flags bear red saltires. This is the “Saint Patrick’s Cross” that may have been used to represent Ireland by the English government in the seventeenth and eighteenth century. The evidence for this is very thin, and in the case of Cork’s arms the saltire flags seem to have absent from the arms more often they were present.

The arms represent the City as a safe harbour for shipping. It has been noted that the arms are similar to those of the City of Bristol in south west England. One of Cork’s first charters was modelled on that of Bristol and there is a long history of trade between the two cities, but the adoption of similar arms is more likely to be a coincidence.

The motto can be translated as “A trustworthy harbour for ships” and is adapted from Book II of Virgil’s Aeniad. In the original it talks of the island of Tenedos being an untrustworthy harbour (statio male fida carinis), but the classically minded city fathers of Cork altered it to form a fitting accompaniment to the arms.