From Heraldry of the World
Your site history : Cork (county)
Jump to navigation Jump to search 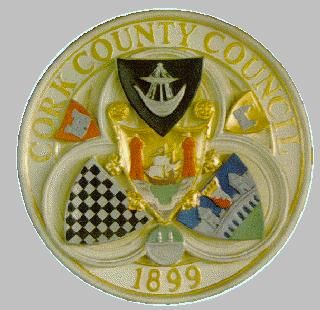 In May 1899 Mr. Robert Day was appointed by the Council to select the most appropriate design for the seal of Cork County Council from sixty-five submissions. The winning entry was from Guy and Company Limited, Cork and is described as follows:
"The design contains within the trefoil shape the shields of four ancient boroughs corporate, Youghal, Kinsale, Bandon and Cork, the latter occupying the central position as the chief city of the province, and which gives its name to the county. In the angles of the trefoil are placed the shields of three of the less important towns within the jurisdiction of the County Council. The whole enclosed in circular form, the upper part bearing the title and at the bottom the year of institution. The raised outer rim is composed of a running border of shamrocks. Celtic ornament is introduced into the sunk trefoil shape.

The three towns not mentioned are Castlemartyr, Charleville and Midleton all of which had been boroughs corporate prior to the Municipal Corporations (Ireland) Act, 1840. Clonakilty had also been a chartered borough but surprisingly never had a shield or coat of arms and this perhaps explains its omission from the shield.A description of the armorial bearings are as follows (moving clockwise):
(Centre) CORK CITY, has no armorial bearings registered in Ulster's office. Those attributed to the city and generally used are - Or, on waves of the sea a ship of three masts in full sail proper, between two towers gules, upon rocks also proper. Motto : STATIO BENE FIDA CARINIS (a trustworthy harbour for ships). Burke in his General Armory blazons the coat, Or, an ancient ship between two castles in fesse gules.
(12 o'clock) YOUGHAL, The ancient seal of the town represent An ancient one-masted ship or galley with sail furled and yard square set. The arms are not registered in Ulster's office, but they are usually blazoned sable with galley argent sometimes or.
(2 o'clock) CASTLEMARTYR, has no arms recorded in Ulster's office. Castlemartyr was incorporated by charter of Charles II, dated July 28, 1675. The arms of the borough are engraved upon the silver mace, now in the possession of Mrs. Leycester, of Ennismore, Cork, and represent a castellated building of two square towers, with pyramidical tops, from the tallest of which a flag is floating.
(4 o'clock) BANDON, has no arms recorded in Ulster's office. The seal represents an embattled bridge of seven arches, with water transfluent in base, at either end of the bridge thereon an embattled gateway, domed. In the centre chief point an escutcheon party per bend embattled argent and gules, surmouted by an Earl's cornet proper (the arms of Boyle, Earls of Cork and Orrery).
(6 o'clock) MIDLETON, has no armorial bearings registered in Ulster's office. The old Corporate seal of the town bears - Argent, on a chief vert, two spear heads of the first, embrued gules, with the legend, "Corporation of Midleton, 1670," round the margin. These are, of course, the arms of BRODRICK, LORD MIDLETON, whose ancestor, Sir John Broderick, Knt., received a charter of incorporation for the town from Charles II in 1670.
(8 o'clock) KINSALE. Chequy argent and sable. These arms are not registered in Ulster's office, but appear upon a seal of the Corporation, which bears the legend, "The Armes of the Corporation of Kinsale." A tree and a bird perched on a branch at the dexter side, appears to be growing from the top of the escutcheon. This is probably intended for a crest, but in another seal a foliated ornament occupies its place.
(11 o'clock) CHARLEVILLE, has no arms recorded in Ulster's office. "The seal of the mayoralty of the staple of Borough of Charleville" exhibits an embattled gateway or castle.