From Heraldry of the World
Your site history : Cork Institute of Technology
Jump to navigation Jump to search 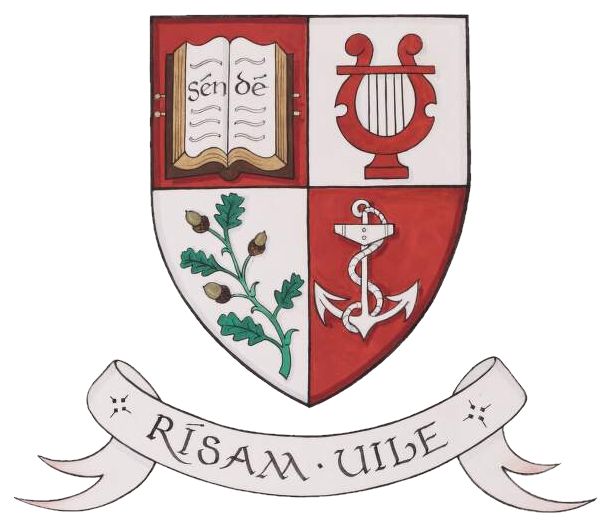 Quarterly gules and argent: 1, an open book proper garnished or thereon the words SÉN DÉ sable; 2, a lyre of the first; 3, a sprig of oak vert fructed of the third; 4, an anchor erect cabled of the second, argent. With the motto: Rísam Uile.

The words Sén Dé inscribed on a book in the first quarter and the motto Rísam Uile are both derived from the Hymn of St. Colman, considered to be the oldest extant document from a Cork source. In the seventh century, St. Colman mac Uí Chluasaigh was the lector in Cork monastery. Attached to the monastery was a renowned school, the earliest known school in Cork.
The hymn was said to have been composed by St. Colman and the students about 661 A.D. to save themselves from the Yellow Plague that was sweeping the country. The first two words of the hymn, Sén Dé - God’s Blessing - also give the title to the hymn. Later lines refer to the students around the school and include “Let us all achieve the peace of the kingdom.” A version of two words from these lines, Rísam Uile - let us all achieve - were used for the motto on the coat of arms.

The other quarters refer to learning, hope, strength, vigour and the Muses.