From Heraldry of the World
Your site history : Cornwall Collegiate and Vocational School
Jump to navigation Jump to search 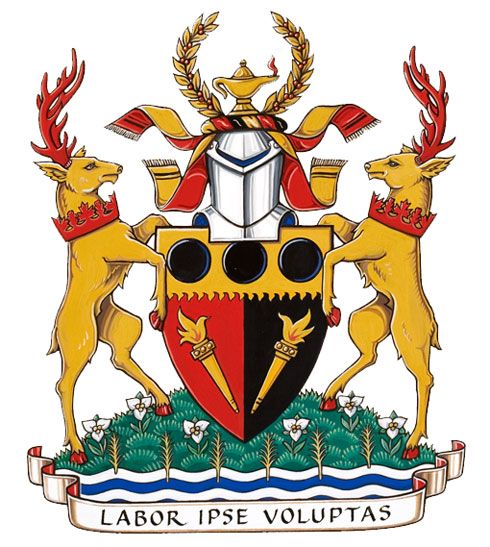 Arms: Per pale Gules and Sable two torches Or, on a chief rayonné Or three pellets
Crest: An antique lamp contourné Or enflamed Gules within a wreath of laurel Or fructed Gules
Supporters: Two stags Or each attired, unguled and gorged with a Loyalist civil coronet Gules, standing on a grassy mound Vert set with trillium flowers and wild rice stalks proper rising above barry wavy Argent and Azure
Mottoes: LABOR IPSE VOLUPTAS

The arms use the colours of the school: red, black and gold. Its identity as an educational body is indicated by the two torches, representing the two hundred years of its continuous existence as a school, under evolving names, since 1806. They are placed on the two divisions symbolizing pages of an open book. The gold upper part of the shield contains black discs that appear in the arms of the City of Cornwall, thus containing a reference that the school is located in the city. The division line illustrates flames, alludes to the idea that education will continue under the spirit of inspiration, and speaks to the interaction between school and community.

The lamp is an emblem in long use by the school, symbolizing inspiration and achievement. It sits on a helmet which shows a Metis sash as mantling.

The stags allude to the Reverend John Strachan, first principal of the school, who used personal arms containing such a stag. The coronets represent the Loyalist heritage in the Cornwall area. The trillium flowers allude to the province of Ontario, the wavy bars to the St. Lawrence River, and the wild rice plants to a Native presence in the area.

The motto means “Labour itself is pleasurable”.