From Heraldry of the World
Your site history : Corpus Christi College (Oxford University)
Jump to navigation Jump to search 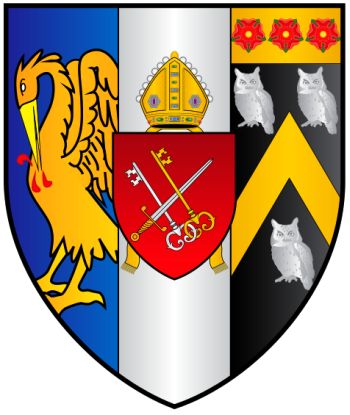 Tierced per pale, the centre . argent thereon an escutcheon of the Arms of the See of Winchester ensigned with a mitre all proper, the dexter side azure a pelican Or vulning her breast gules, the sinister side sable a chevron Or between three owls argent on a chief gold as many roses gules barbed and seeded proper.

Corpus Christi was founded by Bishop Richard Fox of Winchester and was the first outward manifestation of the arrival of the Renaissance at Oxford. As in the arms of Brasenose, the arms of the founder's See are shown in the centre, in this case on an argent field, and a pelican vulning herself proper, a symbol of the Body of Christ. On the sinister are shown the arms of Hugh Oldham, Bishop of Exeter, a benefactor. His arms are, sable a chevron or, between three owls argent, on a chief of the second, as many roses gules, barbed and seeded proper (see also Oldham).