From Heraldry of the World
Your site history : Court of Lord Lyon
Jump to navigation Jump to search 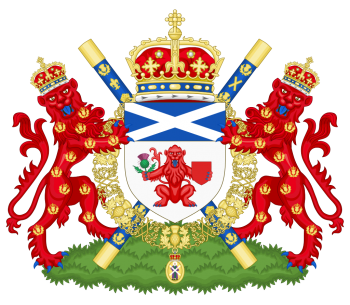 Argent, a lion sejant affrontee Gules holding in his dexter paw a thistle slipped Vert, flowered Proper, and in the sinister paw a shield Gules, on a chief Azure a saltire of the First. Above the Shield is placed the proper Crown of the Lyon, being precisely after the model of the Imperial Crown of Scotland yet not set with stones but only enamel; behind the Shield are disposed in saltire two representations of the Batons of the Lord Lyon King of Arms, videlicet: Azure, tipped Or, that on the dexter semee of thistles, roses, harps and fleurs de lys also Or (as Lord Lyon King of Arms), that on the sinister semee of thistles and St. Andrew’s Crosses of the Last (as King of Arms of the Most Ancient and Most Noble Order of the Thistle). Around the Shield is placed the Lord Lyon’s Collar of Thistles linked with sprigs of rue interwoven Or and having from it pendent by a Scottish Imperial Crown Proper an oval medallion Or displaying the figure of St. Andrew vested Vert surcoat Purpure bearing before him the cross of his martyrdom Argent, and on a compartment below the Shield are set the proper Supporters of the Lord Lyon King of Arms two lions rampant guardant Gules armed and langued Azure each crowned with the proper crown of the Lord Lyon King of Arms, their bodies semee of thistles crowned Or.

If you have any information on these arms of Lord Lyon mail us !