From Heraldry of the World
Your site history : Craig Ryan Steepy
Jump to navigation Jump to search 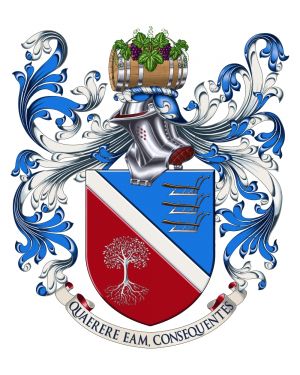 Arms: Per bend Azure and Sanguine a bendlet Argent, in sinister chief three ancient ploughs in pale proper, in dexter base an oak tree eradicated proportional of the third.

Crest: Above the shield is placed a helm with a torse Argent and Azure with a mantling of the liveries. For Crest a tun fesswise proper draped with grape vines leaved Vert fructed Purpure.

Motto: Quaerere Eam, Consequentes (Seek it out, Pass it on)

These arms are a variation of the arms of Richard Steepy, the armiger's ancestor, as recorded with the Armorial Register No. 0234. The blue field and white bendlet represent the uniform of the New Jersey regiments during the American Revolutionary War, of which Richard Steepy was enlisted. The three ploughs represent the family's occupation in agriculture. The field of dark red (Sanguine or blood red) in the lower right symbolizes family genetics while the Oak tree symbolizes family history, past, present & future and the armigers role as the Steepy family historian. Crest: The barrel and grape vines represents the armigers other passion as a vintner and connoisseur of red wine.