From Heraldry of the World
Your site history : Crandall University
Jump to navigation Jump to search 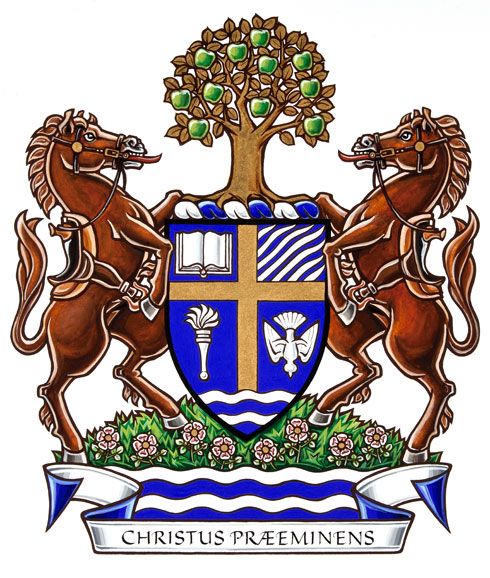 Arms: Azure a Latin cross throughout Or issuant from a base barry wavy Argent and Azure, between first an open book, second rays in bend sinister, third a torch enflamed, and fourth a dove descending Argent
Crest: An apple tree Or fructed Vert
Supporters: Two horses saddled and bridled proper standing on a grassy mount Vert set with wild roses proper above barry wavy Argent and Azure
Mottoes: CHRISTUS PRÆEMINENS

The arms were initially granted on September 15, 2010.

The design closely follows that of the arms used by Crandall University’s predecessor body, the Atlantic Baptist College (later the Atlantic Baptist University) for the past 40 years. The cross at the centre of the shield refers to the centrality of the cross in the mission and history of the institution since its founding in 1949, as well as in the teachings of the Reverend Joseph Crandall (1771-1858), a pioneering figure in the Baptist movement in Atlantic Canada and the university’s namesake. The open book symbolizes Bible-based learning. The rays of light indicate light shining down from God and then rising back as a reflection of his glory. The descending dove symbolizes the Holy Spirit. The torch, which symbolizes the fullness of the Holy Spirit, was the principal symbol on the seal adopted in 1899 by the Foreign Mission Board of the Baptist Convention of the Maritime Provinces. The waves symbolize the Atlantic region.

The apple tree recalls the orchard that once stood on the present site of the university. It also recalls the group of Baptists who, in 1763, established a settlement on the Tantramar region of what became New Brunswick in order to “plant a new church”. The green colour of the apples symbolizes hope.

The horses symbolize the pioneering pastors and itinerant preachers, including Joseph Crandall, who travelled by horse to evangelize immense regions and territories. The horses depicted here are Canadian horses, a breed recognized as an official symbol of Canada, and which were used extensively in the early history of the region. The compartment on which the horses stand refers to the land and sea of the Atlantic region served by Crandall University. The wild roses are a common flower in the region. They are chosen to illustrate the religious fervour of Joseph Crandall, who commented in his autobiography of his evangelizing work: “Truly the wilderness blossomed like the rose”.

The motto means “Christ preeminent”, and is inspired by Colossians 1:18: “And he is the head of the body, the body the church: who is the beginning, the first born from the dead; that in all things he might have the preeminence