From Heraldry of the World
Your site history : Cruiser USS Bunker Hill
Jump to navigation Jump to search 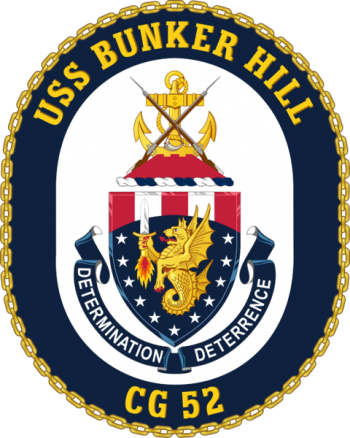 The sword the dragon is holding symbolizes the VLS (Vertical Launch System) missile capability. The Stars symbolises the 11 Battle Stars the former USS Bunker Hill (CV-17) earned in the Pacific Theater during World War II. The white fields in the chief indicates the American courage displayed at the Battle of Bunker Hill on 17 June 1775. The Red parts symbolises the attacking British Forces that a geat cost took the Hill.

The crossed muskets are in rememberance of the Battle of Bunker Hill. The Anchor symbolises maritime traditions and excellence of achievement.