From Heraldry of the World
Your site history : Cruiser USS Lake Champlain
Jump to navigation Jump to search 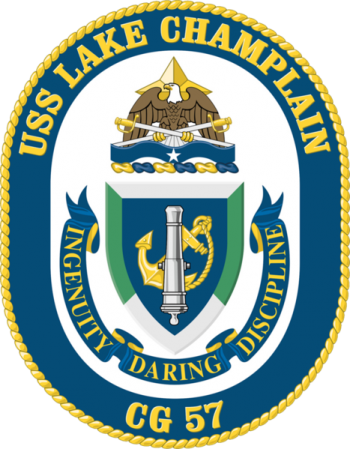 The white and grenmen border around the blue field respresent the Lake Champlain and the surrounding terrain where two significant naval battles wher fought. The first, the Revolutionary War Battle of Valcour Island is symbolised by the white star in the crest.The second, the War of 1812 Battle of Lake Champalin is represented by the anchor and cannon of the blue field. The partitions of the border suggest rotation of turning and allude to the American ship's movements during the Battle of Lake Champlain. The vertical position of the baval gun exempölifies the vertical capabilities of the AEGIS CG Class naval ship. The Eagle bearing in its Talons the Naval Swords symbolises martial strength and the American victory at Lake Champlain. The Two swords also symbolises the two previous Ships named Lake Champalin. The wavy Bar symbolise Lake Champlain itself. The Gold four-pointed Star indicates the four mission of the AEGIS cruiser, to offensively engage aicraft, missiles, submarines and surface ships.