From Heraldry of the World
Your site history : Cruiser USS Vincennes
Jump to navigation Jump to search 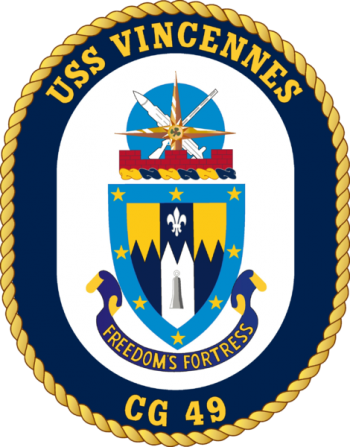 The three divisions of the shield represent the three circumnaviations of the earth made by the first vessel to bear the name Vincennes. The Indented fess line represent the ice of Antarctic continent which was discovered and named by Lieutenant Charles Wilkes of Vincennes in 1840. The white area in center base which bears a led line weight of the early 19th Century period, referring to the new data in charts and cartography gathered by the surveys made during expeditions with Vincennes as flagship. The fleur de lis in chief alludes to the French origin of the Name Vincennes and the Fort in Indiana after which the ships were named. The eight gold stars on a light blue border represent the Battle Stars awarded to the CA-44 and CL-64 during World War II and refer again to the State of Indiana, whose Flag bears gold Stars on a Blue field. The embattled wall in the Crest again alludes to Fort Vincennes. The Three battlements symbolises the three earlier named Vincennes. The compass rose represents global navigation and exploration. The clover is a reference ti the new ships' distinction as third of its class, and recalls the botanical surveys of the first Vincennes. The guided missile and rifle represent new and old weaponry carried by the latest and the first Vincennes. The blue disc is a reference to the Antarctic skies and the first Vincennes' explorations.