From Heraldry of the World
Your site history : Cruiser USS Yorktown
Jump to navigation Jump to search 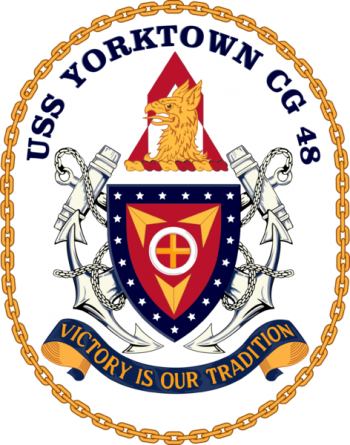 The annulet and cross allude to a telescopic gunsight, and recognise the birth of modern naval gunnery in the second Yorktown with the first successful test of the telescopic gunsight in 1892. The arrowheads symbolise Aircraft and the role played in World War II of the third and fourth Yorktown as Aircraft Carriers. They also symbolises the AEGIS Weapon System of the Cruiser. The 19 Stars on the Brodure symbolises the 19 Battle Stars of the previous Yorktown's. The Griffin's Head symbolises heritage and spirit of the Yorktown. The Chevron rompu symbolises the siege of Cornwallis' Troop by American and French Troops at the Battle of Yorktown.