From Heraldry of the World
Your site history : Darmstadt
Jump to navigation Jump to search 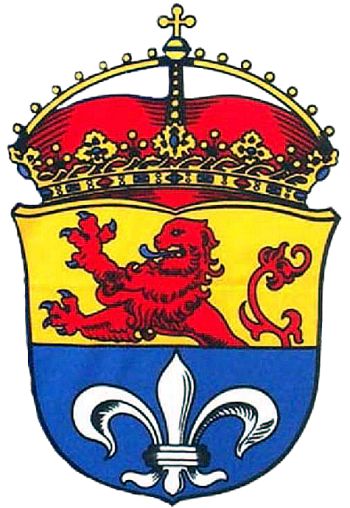 The arms of Darmstadt are based on the old seals of the city, which already showed a lion and a fleur-de-lis. The lion is the lion of the counts of Katzenelnbogen. The fleur-de-lis is a very common symbol for towns and villages in this former county. On top of the shield the Grand-Ducal coronet of Hessen may be placed.

In former times the partition line was covered by a bar, on which were placed silver balls. This was supposedly derived from the arms of the oldest Lords of Darmstadt (13-15th century). In 1479 the town and surrounding area, being part of Katzenelnbogen, became part of Hessen.

The present arms were granted in 1917 and the colours were based on those on a stone dating from the 15th century. Currently the city uses again the crown on the shield, but for every day purposes the crown is omitted.